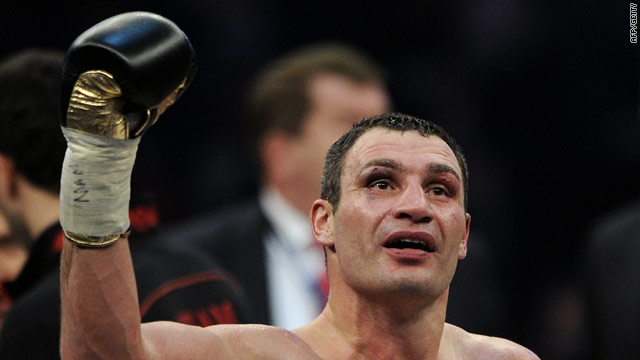 Klitschko celebrates his unaminous 12-round points decision over Johnson in Bern.
STORY HIGHLIGHTS

(CNN) -- Vitali Klitschko successfully defended his WBC heavyweight title against American Kevin Johnson in Bern and then looked ahead to a super-bout next year against new WBA champion David Haye.

It was his third defense of the WBC version of the crown since he reclaimed the title after an injury layoff.

His brother Wladimir holds the IBF and WBO titles, but it's Briton Haye who offers the route to a unification bout that would capture the imagination of the wider sporting public.

The flamboyant Haye beat Russian giant Nikolai Valuev to claim the WBA title last month and Klitschko said he was ready for a clash in 2010.

"This will be very interesting to fight Haye but let's see what next year brings," he told ringside reporters.

"Let's see, I am ready. "Right now Haye will be fighting John Ruiz. I wish him luck and let's see."

Haye was supposed to have fought Wladimir earlier this year for his titles, but pulled out injured before outclassing Valuev over 12 rounds in Germany.

The 38-year-old Vladimir had too much strength for Johnson, who spent much of the fight on the ropes and could never make any real impression.

Haye's trainer Adam Booth is confident his charge can beat the WBC champion if the match is made.

"It was a typical Vitali performance," he told Sky Sports News

"He does the same thing every second of every round of every fight and it amazes me that these so-called elite heavyweights cannot figure out that there is a simple answer to that style to be able to land your punches."

Haye must first beat American John Ruiz in a mandatory defense before getting his chance of staking his claim as the best heavyweight in the world by beating the Klitschko brothers.