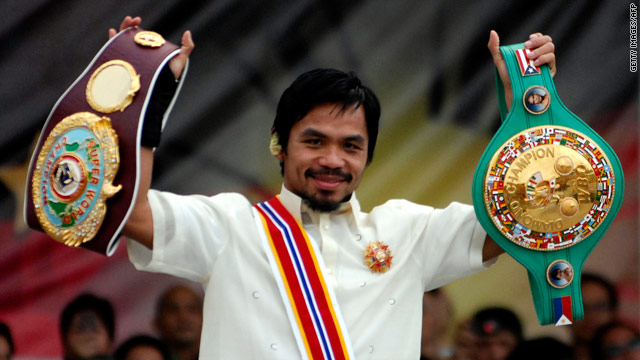 (CNN) -- The proposed super-fight between Manny Pacquiao and Floyd Mayweather Jnr has been thrown into doubt because of a dispute over the timing of a pre-match blood-test according to Golden Boy Promotions.

Richard Schaefer, chief executive of Golden Boy who promote Mayweather, announced on the company's official Web site that the Filipino would not agree to blood-testing in the immediate run up to the welterweight fight which had been expected to take place in March.

Mayweather's management have requested the fighters submit to Olympic-style blood testing as outlined and mandated by the United States Anti Doping Agency (USADA) 30 days prior to the bout.

But Schaefer claims that Pacquiao has refused to have blood taken so close to a fight with the American.

"Pacquiao would only agree to have blood drawn before the kick-off press conference and after the fight. It is unfortunate to hear this from Manny Pacquiao's representatives, particularly since both parties had worked out all other issues related to this fight," Schaefer said on the Golden Boy Promotions Web site.

Mayweather, who was informed of Pacquiao's reluctance shortly after Schaefer received word of the impasse, empathized with his possible opponent but hopes he will undergo the tests.

"I understand Pacquiao not liking having his blood taken, because frankly I don't know anyone who really does," Mayweather said.

"I hope this is either some miscommunication or that Manny will change his mind and step up and allow these tests, which were good enough for all these other great athletes, to be performed by USADA."

USA Today reported an angry response from Pacquiao's promoter Bob Arum of Top Rank, who said the fight was now in jeopardy.

"The press release is absurd, the plug [on the fight] is pulled. The fight is off as far as we're concerned," he said.

Arum, who has previously represented Mayweather added: "It proves Mayweather is a coward and he's looking for a way out of the fight.

"The Nevada commission has been doing drug testing for the last 40 years. To appease Mayweather, we agreed they could do urine analysis anytime they wanted. But Manny doesn't want them to draw his blood when he's in training because it weakens him," he told the American newspaper.

Their super-fight was widely reported to be set for the MGM Grand in Las Vegas on March 13, with only the final details to be thrashed out and an official announcement early next month.