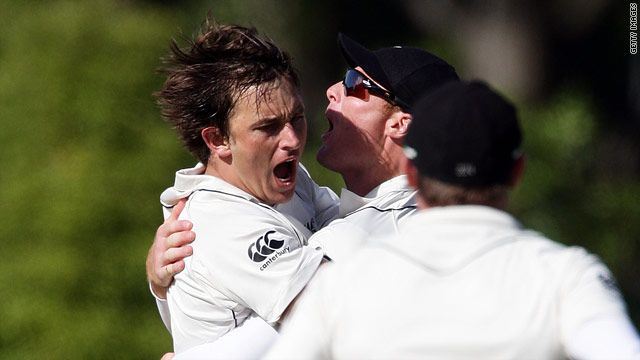 Bond (left) is congratulated by teammates after taking a wicket in his final Test.
STORY HIGHLIGHTS

Bond was also temporarily banned after playing in the rebel Indian Cricket League, but returned to play against Pakistan in a home series after a two-year absence.

He took five wickets in an innings for the fifth time in his career and eight in all, but it proved his final appearance as he was sidelined with an abdominal tear.

"It's been a tough call, because Test cricket remains the ultimate form of the game, but I'm comfortable I've made the right choice," Bond said as he announced his retirement.

I feel I gave as much as I could, but looking back, so many of my injuries have come during Test cricket
--Shane Bond

Bond said that his body could not stand the rigors of five-day Tests but he would remain available for the shorter form of international cricket.

"I've worked really hard to get back to Test match fitness -- it's what I've been working towards for the past two years -- and I feel I gave as much as I could," Bond added.

"But looking back, so many of my injuries have come during Test cricket."

He is aiming to rejoin the New Zealand squad for the limited-overs matches against Australia, which start with two Twenty20 internationals in late February.

In other cricket news on Wednesday, Australia captain Ricky Ponting remains a doubt for the Boxing Day Test against Pakistan in Melbourne after failing to bat during a practice session.

Ponting injured his elbow in the the third Test win over West Indies at Perth and Australia have drafted in Phillip Hughes as cover.

"Ricky Ponting is a very tough character, he is our leader so we are planning on him being around and let's hope he is ready for Boxing Day," wicketkeeper Brad Haddin told reporters.