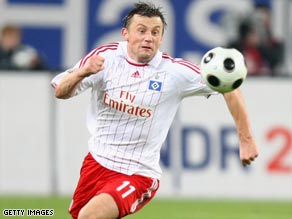 Olic will join Bayern Munich at the end of the season after proving a success in his time at Hamburg.

"We've struck an agreement to sign Olic at the end of the season. All we need now are the signatures under the contract," said Bayern general manager Uli Hoeness following the team's arrival at a winter training camp in Dubai.

Olic will complete his move on a free transfer on July 1 and will sign a three-year contract binding him to the club until 2012.

"I'll do everything I can to mark my departure from Hamburg with a trophy," the 29-year-old Olic vowed on Friday, as he and his team-mates prepared for a winter training camp almost exactly parallel to Bayern's in Dubai.

The two teams will meet on January 30 in Hamburg in a match marking the official start of the second half of the Bundesliga season.

Olic joined Hamburg from CSKA Moscow in January 2007 having won three league titles and the UEFA Cup in Russia. He has already scored 12 goals this season and has netted 11 times in 61 internationals for Croatia.

"We're certain Ivica will be a perfect compliment to our strikers Luca Toni and Miroslav Klose. One pleasing aspect is that he is out of contract at the end of the season," said Bayern chairman Karl-Heinz Rummenigge last month.