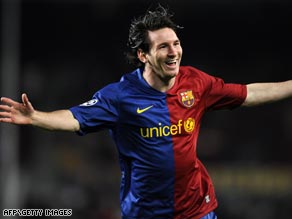 Argentine coach Diego Maradona watched as one of his World Cup stars found the target after 12, 58 and 80 minutes having been rested for last weekend's 3-1 Primera Liga win over Real Mallorca.

Messi fired the first beyond French goalkeeper Gregory Coupet following a return pass from Daniel Alves and added the second from the penalty spot.

He sent Coupet the wrong way following an infringement that saw John Heitinga red carded before Atletico pulled one back through Czech defender Tomas Ujfalusi after 69 minutes.

Messi completed his treble 10 minutes from time before leaving to a standing ovation with record 24-time winners' Barcelona facing a comfortable task in next Wednesday's return leg.