(CNN) -- Chelsea owner Roman Abramovich has lost his position at the top of football's rich list but David Beckham remains the wealthiest player. 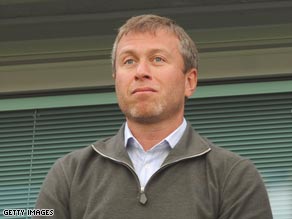 Abramovich set a trend with his massive cash injection into Premier League Chelsea.

Sheikh Mansour, a member of the Abu Dhabi royal family, has a fortune of £15 billion ($22.04B), according to the Football Rich List, researched and published by FourFourTwo magazine.

Abramovich has also been overtaken by Indian industrialist Lakshmi Mittal, who is the joint owner of second-flight English side Queens Park Rangers with Formula One's Bernie Ecclestone and Flavio Briatore.

Abramovich has seen his fortune cut by over £3 billion to £7 billion ($10.29B) in the global economic downturn, the magazine estimated.

England head coach Fabio Capello is 73rd on the list, boosted by his own private art collection, with Manchester United manager Sir Alex Ferguson at number 78.

English football had dominated comparable rich lists for several seasons but many financial experts fear the good times may be coming to an end as the global economic crisis bites.