The job that pays 95 times more than Obama's

LONDON, England (CNN) -- Twenty-six year old Brazilian footballer Kaka is at the subject of negotiations about a salary that could see him earn nearly 95 times more than what Barack Obama will be paid when he enters the White House. 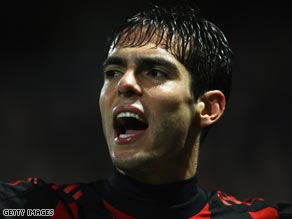 Reports circulated Wednesday that the AC Milan midfielder is being offered a £500,000 ($726,000) per WEEK salary by English Premier League club Manchester City.

A statement on Italy's Mediaset Web site appeared to suggest he will turn down the offer, however Manchester City officials insist the talks are ongoing.

Even if he declines the move, the offer is far beyond the pay for many other high-profile jobs.

For example, the U.S. President receives about $7690 per week, while British Prime Minister Gordon Brown receives around $5233.

What do you think of these salaries? Should footballers be paid more than world leaders? Tell us in the Sound Off box below.

A comparison of a variety of salaries shows just how highly footballers, and professional sportsmen and women are paid in relation to other jobs. Even current football salaries dwarf the pay for most executive positions and public offices.

If Kaka's deal does proceed, he will earn more than triple the Premier League's current highest-paid player, Robinho. The Brazilian, also with Manchester City, earns approximately $232,580 per week.

Manchester City is owned by Sheikh Mansour bin Zayed Al Nahyan of Abu Dhabi, a man believed to be worth about $22 billion -- so funding the salary shouldn't be a problem.

Kaka's current salary at AC Milan was believed to be about $208,000 per week.