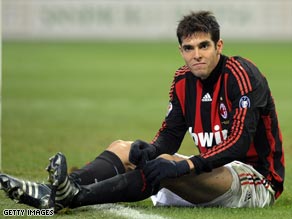 Wanted man: Kaka overcame a spine fracture before getting to the top of world football.

Born in Brazil in 1982, Ricardo Izecson dos Santos Leite, or "Kaka" as he is more commonly known, is a footballer with Italian club AC Milan.

His name, Kaka, is believed to come from a brother, who began calling him that due to his inability to say his proper name -- Ricardo.

Said to be an amazing talent from a very young age, the attacking midfielder began his career with Sao Paulo at the tender age of eight, and had signed his first contract before his 16th birthday.

Do you think Kaka should have stayed at AC Milan or taken the money at Manchester City? Tell us in the Sound Off box below.

However, when all seemed set for a perfect career, Kaka suffered a serious, potentially paralyzing injury from a swimming pool accident in 2000. The then 18-year-old fractured a vertebra in his spine -- an injury that many thought could have ended his career and even prevented him from walking again.

Kaka did recover though, and it's something that the deeply religious Brazilian has put down to the help of God, and ever since has given some of his income to his Church.

Once recovered, he didn't waste time in getting his career restarted.

By January 2001 he had made his debut in the Sao Paulo senior team and led the team to its first Torneio Rio-Sao Paulo championship.

The following year he was a part of the Brazil team which won the 2002 FIFA World Cup, and in 2003 his talents had attracted the interest of European clubs and he signed to AC Milan for euro 9 million ($12 million) per season, and remains under contract with them through 2013.

Since then he's won the Serie A, UEFA Champions League and FIFA Club World Cup with AC Milan, while on a personal level he won the 2007 Ballon d'Or Award for the best player in Europe and the FIFA World Player of the Year 2007 -- among many other awards.

His international performances have continued to be strong -- and he has now scored 23 goals for Brazil.

Such is his influence inside and outside of football, that Kaka was named in the Time 100 most influential people in 2008.

Outside of the game Kaka has continued to be a devout Christian. He married his long-time partner Caroline Celico in 2005, and they had their first child in June 2008.

Oddly, the current season (in which he finds himself being offered the biggest football salary ever) hasn't been as profitable for Kaka.

The 26-year-old has struggled with a groin injury and has not managed to combine as smoothly within the AC Milan team compared to previous seasons.

Still, that did not seem to worry Manchester City -- or Real Madrid, and for now at least, the $150 million transfer effort remains the biggest in football's history.