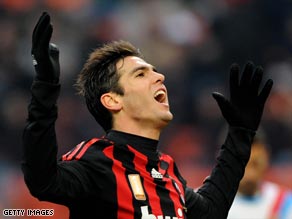 Kaka opted to stay with AC Milan despite the riches on offer.

The 2007 world player of the year was set to earn $750,000 per week with City, who were reported to be willing to pay a staggering $147 million to acquire his services.

The devoutly religious Kaka explained his reasons on the club's television station.

"I believe I have made the right choice.

"To have gone to Manchester City could have been a great project but in the past few days I have prayed a lot to understand what the right team would be and in the end I have decided to remain here.

"I don't want anything else, I just want to be well and be happy in the place where people love me."

Italian prime minister and Milan owner Silvio Berlusconi originally broke the news that the devoted fans of the Rossoneri wanted to hear.

Interviewed on Italian TV's Sky Italia late on Monday night, Berlusconi confirmed that Milan had offered Kaka the chance to "make himself a fortune, but said he has "higher values."

Berlusconi continued: "He is staying with us, there are things which are more important than money: we are happy.

"When I heard he would prefer to stay, that he didn't think he would be missing a great opportunity and he prefers the values of our flag, the values of closeness and friendship, the warmth and the affection that all the fans have shown him in these days, I said 'hooray' and we hugged. Kaka is staying at Milan."

They intensified after Kaka played in the 1-0 home win over Fiorentina which improved Milan's Serie A title chances as arch-rivals and league leaders Inter Milan slipped up.

Have your say: Should Kaka have stayed at AC Milan or taken the money?

City, who are being backed by Sheikh Mansour's Abu-Dhabi investment group, finally admitted defeat in a statement on their club Web site www.mfc.co.uk from executive chairman Gary Cook:

"Whilst Manchester City Football Club has an obvious interest in world-class players of the quality of Kaka, we owe it to our fans that such a transfer must work on every level; commercially, financially, in terms of results on the field and within Manchester City's broader community."

Cook and a City delegation returned to Manchester without ever managing to meet 26-year-old Kaka face to face, dealing instead with Milan officials and his father Bosco Leite.

Manager Mark Hughes, who completed the signing of striker Craig Bellamy from West Ham on Monday, will also be hoping to finalize a deal to acquire midfielder Nigel De Jong from Hamburg as he strengthens his squad in the January transfer window.

City, who are struggling in 11th in the Premier League and out of the FA Cup, signed Kaka's Brazilian international teammate Robinho from Real Madrid shortly after their new Abu Dhabi owners took over last summer.

Robinho has proved an immediate success with 12 goals, but City are aware of the need to attract more world class players to their ranks, hence the ulitmately fruitless attempt to sign Kaka.

In a separate development, Robinho moved quickly to deny reports that he had stormed out of City's training camp in Tenerife because they had failed to sign his friend Kaka.

"I had made Manchester City aware that I needed to return to Brazil because of a family matter," he told BBC Sport. "I will return to the club and hope to sort this out as soon as possible."

He added: "I feel it is important to underline that I did not return to Brazil because of the Kaka deal.

"He is one of my good friends and it would have been great to see him at Manchester City -- but it had nothing to do with his decision to stay in Milan.

"I am committed to helping Manchester City become the force the owners assured me they will become."