LONDON, England (CNN) -- A survey by football's governing body FIFA has found that more than half of South African people are worried about the country's high crime rate impacting the 2010 World Cup. 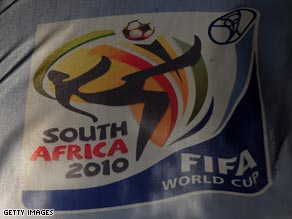 South Africans are happy to have the World Cup, but worried about crime during the event.

The World Cup, which goes to South Africa for the first time next year, is the beautiful game's showpiece event and is expected to attract global interest in the African nation.

FIFA's survey showed 53 percent of people were worried that the nation's crime rate -- which is one of the highest in the world -- could affect the event, which is now less than 500 days away.

Are you worried crime may affect the 2010 World Cup? Tell us in the Sound Off box below.

Official statistics from the country show violent crime is a major issue, with more than 17,000 murders and almost 137,000 serious and violent assaults recorded in 2007.

Despite the concerns, more South Africans (77%) now believe the World Cup will be a success, and 91% of people believe the event will have a positive effect on the country's tourism sector, the survey found.

Overall, 88% of people said they were "proud" that South Africa was hosting the 2010 event.

FIFA president Sepp Blatter said security at the event would be very tight.

"Through the competition, there will be extremely tight security, just as there is at the Olympic Games and other huge sporting events. We hope that this security will be maintained after the World Cup in order to ensure that we have left a legacy," Blatter said.

One thousand people were questioned for the FIFA survey.