(CNN) -- Manchester United went five points clear at the top of the Premier League as goalkeeper Edwin van der Sar set a new English record for minutes in not conceding a goal in the 1-0 victory over Everton. 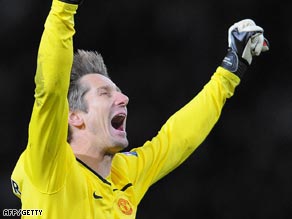 Van der Sar was left to celebrate a United win and a new goalkeeping record.

Cristiano Ronaldo grabbed the winning goal with a 44th minute penalty but once again it was United's rock-solid defense and keeper that made sure of the vital three points.

The Dutch international was breaking the previous record set by Reading's Steve Death 30 years ago.

He had taken Petr Cech's Premier League record in the 5-0 win at West Bromwich Albion last week and has now had 12 straight clean sheets.

With title rivals Chelsea and Liverpool playing each other on Sunday and Aston Villa being held 0-0 at home by Wigan, the record was the icing on the cake for Alex Ferguson's defending champions.

World footballer of the year Ronaldo had hit the post in the first half before converting from the spot after Michael Carrick was tripped by Mikel Arteta.

In truth, Everton, missing three strikers through injury, rarely troubled van der Sar with most of the action at the other end.

Carrick had appeals for a second penalty turned down after appearing to be brought down by Joleon Lescott, but referee Mark Halsey ignored his pleas.

Carlos Tevez shot wide from Park ji-Sung's right wing cross and Tim Howard later had to save smartly from a deflected free kick from the Argentine star.

United manager Alex Ferguson was delighted with yet another clean sheet and the three points.

"It's a fantastic performance from the boys. I couldn't believe it when I read that the last goal we conceded was against Arsenal in October," he told Setanta Sports.

"Van der Sar brings calmness and assurance. Over the last 12 games we have changed the back four I don't know how many times so you have to give great credit to them."