(CNN) -- Atletico Madrid goalkeeping legend Abel Resino has returned to the Primera Liga club as coach in succession to Javier Aguirre who was dismissed on Monday. 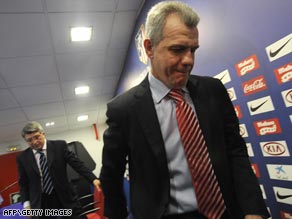 The 49-year-old Resino left second division promotion chasers Castellon to fill the vacancy and will coach Atletico at least until the end of the campaign.

Aguirre, who joined Atletico from Osasuna in 2006, is the seventh Spanish coaching casualty this season.

"After speaking face to face with people, the players, the press, I leave with a clear conscience," said Aguirre who is confident Atletico can recover to clinch another season of Champions League football.