LONDON, England (CNN) -- The English Football Association (FA) is demanding answers from a broadcaster after a key goal in a major cup clash was missed because of an advertisement break. 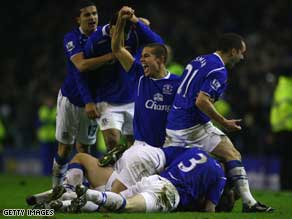 English side Everton beat Liverpool 1-0 with an extra time goal in their FA Cup clash on Wednesday night.

However, the broadcaster screening the match, ITV, missed Dan Gosling's winning strike for Everton as it switched to an automated advertisement break.

In a statement on the ITV Web site Thursday, the channel apologized for the incident.

ITV executive chairman Michael Grade said: "I'd like to apologize to all our viewers who were affected by last night's unprecedented technical error. As a football fan myself I was glued to the match and was as disappointed as anyone to miss the goal.

"Last night's glitch was inexcusable and we are awaiting the results of our technical inquiry so we can put in place stringent and immediate procedures to address this."

The FA, meanwhile, expressed disappointment over the incident and is seeking a "full explanation".

A statement on the FA web site read: "It is obviously very disappointing that viewers and fans did not see the only goal of last night's FA Cup replay between Everton and Liverpool.

"Clearly we are seeking a full explanation from ITV as to why this happened. It is important that lessons are learned and that this does not happen again."