Kinnear taken to hospital prior to match

(CNN) -- Newcastle United manager Joe Kinnear has been taken to hospital for precautionary checks after falling ill before a Premier League match on Saturday. 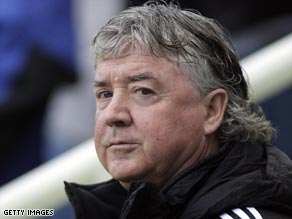 Joe Kinnear has had health problems in recent years and suffered a heart attack in 1999.

In a statement issued on their official Web site, Newcastle said Kinnear felt unwell prior to the away match against West Bromwich Albion and had been admitted to an unnamed hospital.

"After being examined by the club's medical staff, Joe was taken to hospital as a precautionary measure, where he remains under observation."

Newcastle assistant manager Chris Hughton took charge of the team in the absence of 62-year-old Kinnear, who suffered a heart attack prior to a match in 1999 while managing Wimbledon.

The former Tottenham and Republic of Ireland defender was appointed as interim manager at Newcastle in September last year and admitted that his earlier efforts to return to management had been hampered by the concerns of potential employers over his health.