(CNN) -- Barcelona missed the chance to re-open a seven-point lead at the top of the Spanish Primera when they crashed to a shock 4-3 defeat at Atletico Madrid on Sunday. 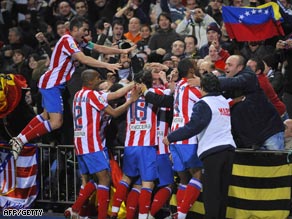 With Real Madrid winning 2-0 at Espanyol on Saturday, it leaves Barca just four points clear of their arch-rivals at the top, having led by 11 points after a long unbeaten run.

But defeats at Espanyol and now Atletico, who move up to fifth with the victory, have undermined their title charge and given defending champions Real a glimmer of hope.

The 25th round match in the Vicente Calderon proved one of the most thrilling matches of the season and Barcelona looked set for a comfortable victory as they led 2-0 through goals by Thierry Henry and Lionel Messi after half an hour.

Henry opened the account with a clever long range effort, while Argentine ace Messi charged into the Atletico box to guide home his 17th of the season.

But Barca's joy was short lived as Diego Forlan quickly pulled one back in the 32nd minute, another superb effort from outside the penalty area.

Atletico equalized through Sergio Aguero in the 56th minute, but when Eidur Gudjohnsen played in Henry for his 14th of the season to give the visitors a 3-2 advantage it looked all over.

But Henry then undid his good work by fouling Florent Sinama Pongolle to give away an 80th minute penalty which Uruguay international Forlan converted to level.

With Barca reeling, it was left to Aguero to surge clear of desperate defenders in the box to strike the Atletico winner for his 14th of the season with a minute left.

Sevilla stay third after winning 2-1 at Athletic Bilboa on Saturday with Frederic Kanoute scoring both, but 13 points adrift of the leaders.