(CNN) -- Manchester United stayed on course for an unprecedented clean sweep of major trophies this season with a penalty shootout victory over Tottenham Hotspur to win the Carling Cup at Wembley. 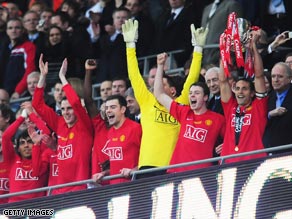 After the final ended Sunday in a goalless stalemate after regulation and extra time, United kept their nerve to win on penalties 4-1.

And when David Bentley tamely sent Tottenham's third penalty wide of the post, it was left for Anderson to add to further successful efforts from Carlos Tevez and Cristiano Ronaldo and seal victory for the Red Devils.

Debate: Do you think Manchester United can do the clean sweep of domestic and European trophies?

United, seven points clear in the Premier League with a game in hand, are also in the quarterfinals of the FA Cup and well-placed to beat Inter Milan in their last 16 Champions League tie.

Manager Alex Ferguson is refusing to be diverted by thoughts of the quadruple to add to their success in the Club World Championship before Christmas.

"Well we could have done without extra time because we have a tough game on Wednesday, but the league and Champions League remain a priority for us," he told Sky Sports.

"We took our penalties very confidently and Ben Foster was fantastic for us."

Foster, a stand-in for regular keeper Edwin van der Sar, made crucial saves from Darren Bent and Aaron Lennon and was named man of the match

Tottenham manager Redknapp is left to contemplate a relegation battle with a crucial match against Middlesbrough on Wednesday, but was proud of his side.

"I thought we were terrific. It was a great performance and it comes down to a lottery in the end with penalties," he said.

United just about deserved their victory on the balance of play in normal and extra time and Ronaldo came agonizingly close to winning it in the third minute of injury time as his shot beat Heurelho Gomes and thundered off the inside of the post.

Tottenham might also have won the League Cup for the second successive year as the excellent Lennon saw his shot parried away by Foster midway through the second half.

Foster also came to United's record in the second period of extra time when he saved Bent's effort with his legs.

United kept faith at the start with youngsters such as Jonny Evans, Darron Gibson and Danny Welbeck, but Tottenham suffered a pre-match blow as Jonathan Woodgate, who scored the winner in last year's final against Chelsea, was ruled out with an Achilles problem.