LONDON, England (CNN) -- All goals count, so we're told. But some are more equal than others and this is a rundown of the best 11 of all time. 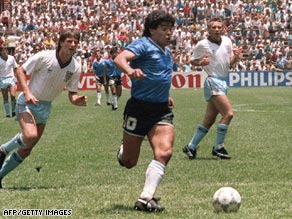 The capitals denote the team the goalscorer was playing for.

Let us know if you agree with our list by posting your comments in the Sound Off box below.

If you're English, the other goal he scored that day sticks in the craw as well as the mind. But for everyone else, Maradona's match-winning genius was never better exemplified by this slaloming run, which started with a drag-back turn and went on to include feints, dropped shoulders and the calmest of finishes. It was later dubbed the goal of the century. Who says players need two feet?

The best team goal of all time. A sublime move began in the left-back spot with Brazil's striker Tostao and it would pass through eight of the team's outfield players before ending up in the Italian net. Clodaldo dribbled mazily in his own half, he gave it to Rivelino, who passed it on to Jairzinho up the left. The winger fed Pele on the edge of the area, who held the ball up before laying it into the space to his right. There, the right-back Carlos Alberto was approaching like an express train and he thundered the ball into the far corner.

Have we missed one of your favorite strikes out? Leave your suggestions below

A miracle of technique, this goal had Zidane written all over it. A rampaging Roberto Carlos sent over a looping cross from the left which dropped seemingly without danger out of the gray Glasgow sky. But from 18 yards out, Zidane, intently watching the ball's flight, caught it perfectly with his left foot, his shot bending unerringly into the top corner.

Much in the same way Zidane's strike against Leverkusen was a triumph of technique, Van Basten's dipping volley against the Soviet Union took the breath away. Arnold Muhren pumped over a ball from wide on the left and everyone was expecting Van Basten, in space on the far right of the box, to either pull the ball down or head it back into the area. Instead he caught it sweetly, sending the ball arching over USSR keeper Rinat Dasaev's head and into the net from an impossible angle.

This was the goal that made Owen a household name. David Beckham found the 18-year-old in space 35 yards from goal and the fearless striker brought the ball under control as he raced towards goal. Shrugging off Jose Chamot's manhandling, he darted to the right of Roberto Ayala and with Paul Scholes approaching to his right to steal his thunder, Owen arrowed his shot over Carlos Roa into the top corner. A star was born.

Deep in his own half, center-back Frank de Boer had few obvious attacking options on. Sixty yards ahead of him, Bergkamp was on the move and De Boer picked out his run with a pin-point pass. As the ball dropped over his shoulder, an airborne Bergkamp killed it and moved it inside the challenge of Roberto Ayala in one fluid movement before flicking it with the outside of his right boot high past Carlos Roa. In the last minute the game was won and jaws everywhere dropped.

Cambiasso's name is in the record books as the goal scorer but the whole Argentina line-up deserves a mention too. A rival to Carlos Alberto's goal against Italy, the ball was shifted effortlessly between dark blue shirts 24 times, in and out of Serbian players, before Cambiasso played a one-two with Hernan Crespo in the box and thumped home. The whole move looked effortless, but goals like that come along once in a blue moon.

Perhaps the most amazing thing about this most amazing goal is its similarity to Maradona's second goal against England. Picking the ball up from deep on the right, Messi ran at the Getafe defense, skipping past challenges until faced with the keeper. Forced wide, he kept his head and clipped home from a tight angle. Maradona would have been proud.

There are only a few players in world football capable of scoring a goal of such impudence. Ibrahimovic always believed himself too good for the Dutch league and this goal proved it in a show of immense skill, strength and ball control. The swaggering Swede danced in and out of countless despairing challenges, teasing the NAC defenders and then the keeper, before finally putting them out of their misery.

Goals that see players run the length of the pitch with the ball are always crowd favorites. Saeed Al-Owairan did something similar to Weah for Saudi Arabia at the 1994 World Cup but the effort by Weah, then the world footballer of the year, sticks longer in the memory. Collecting an over-hit corner in his own box, Weah set off for the heart of the Verona defense. It looked liked he'd lost the ball in the center circle but twisted his way out, flicked the ball round the final defender and ran on to slot home.

It's crazy to think there's a debate about whether Bergkamp meant this classiest of goals. Robert Pires cut in from the left and threaded a pass to Bergkamp's feet on the edge of the area. In the blink of an eye, the Dutch master somehow back-heeled the ball around his marker, Nikos Dabizas, turned, held off the bemused defender and slotted coolly past Shay Given in goal.