(CNN) -- Chelsea reached the quarterfinals of the Champions League with a fighting 2-2 draw against 10-man Juventus in Turin for a 3-2 aggregate victory on Tuesday. 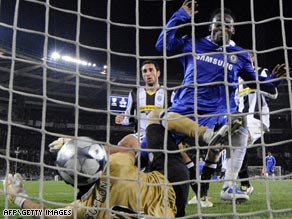 Essien marks his Chelsea return after a six-month injury absence with a crucial away goal in Turin.

Juventus had hauled themselves back into the last-16 tie thanks to a stunning strike from Vincenzo Iaquinta after 19 minutes.The forward was put clear by David Trezeguet and lashed an angled dive beyond Petr Cech.

Michael Essien then lifted Chelsea's spirits when marked his return to the side with a vital away strike in first-half stoppage time --moments after Didier Drogba had been denied a perfectly good goal.

The controversy came in the 44th minute when a free-kick from Drogba crossed the goal-line but was not given by Spanish referee Alberto Undiano or his assistants after goalkeeper Gianluigi Buffon clawed it back into play from behind the line.

But justice was done when Essien, back after six months out with knee ligament damage suffered playing for Ghana, bundled the ball home after Frank Lampard's shot had come down off the underside of the bar.

Juventus had Giorgio Chiellini red carded midway through the second half before reclaiming their advantage on the night.

Alessandro Del Piero scored from the spot in the 74th minute after substitute Juliano Belletti handled a free kick from the Italian forward.

But Drogba wrecked their dreams of a comeback with Chelsea's second seven minutes from time when he prodded home a Belletti cross.

Essien's goal had left Juventus needing to score twice to progress to the last eight and former Blues boss Claudio Ranieri stood sentinel-like inside the technical area as his side toiled away without success.

The Stadio Olimpico had lost its first-half fervour and Chelsea took advantage by the change in atmosphere to put more pressure on the home side.