Blog of the month: Republik of Mancunia

CNN's Football Fanzone presents the "Blog of the month" -- profiling a different football blog every month. In March we look at: Republik of Mancunia.

LONDON, England (CNN) -- With Manchester United continuing their top form from last season and aiming for what would be a remarkable clean sweep of trophies this year, it's only appropriate that we should profile a blog somehow linked to the Red Devils. 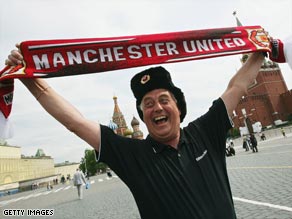 Fan focus: The Republik of Mancunia blog is popular with Manchester United supporters.

The Republik of Mancunia blog focuses on the Old Trafford club and is updated daily with a keen following among thousands of Manchester United fans.

Authored by Manchester-born and raised 25-year-old Scott (who prefers to remain anonymous), the blog began in the 2005-2006 season.

Scott, also known as "Scott the Red," told CNN that before starting the blog he had been published on several football sites, and then "fell into" creating the Republik of Mancunia web site.

"I love talking about United and I'm an argumentative guy, so getting to write my opinions down about the latest goings on is something I really enjoy doing.

"(In 2005-2006) I was also getting on soapbox about the fact we were not in decline, which the current media at the time seemed to think we were," he said.

Scott said running a blog was a very difficult and time-consuming task, though he enjoyed the interaction with other fans.

"I imagine if I wasn't in love with the club, I'd have given up on it long before now. It takes up a lot of time and you get people who support other teams having a go at you on a daily basis, sometimes United fans and all!"

Scott said the readership of his blog, and also contributions to his Manchester United forum came from areas as widely spread as Europe, Africa and even as far as Asia and South America -- with a strong base at home in the United Kingdom.

"I find it odd thinking of some lads thousands of miles away and hours apart sat at a computer and reading my latest rant. I like it though!"