LONDON, England (CNN) -- Football fans in the UK are ushering in a potential new age of football ownership after plotting a takeover bid for English Premier League Liverpool FC. 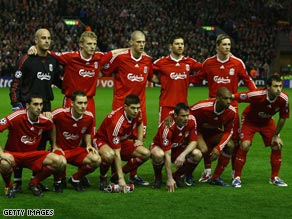 Fan property? Liverpool supporters are plotting a takeover of the club.

The ShareLiverpoolFC organization is a collective of fans looking to raise enough money to make a serious takeover bid at the club.

They are seeking 100,000 people to invest $7,000 to raise $700m that will allow them to take over from the current owners George Gillett and Tom Hicks.

The group plan to have their own fan parliament, fan board and an employed board in charge of the club.

But can absolute fan ownership be considered a serious contender to the existing business model?

In the case of Liverpool, the group appears to be making progress -- after releasing an 'open letter' to the owners inviting them to discuss the purchase of Liverpool FC.

Do you own shares in a football club? Would you want to own and run your team?

Gillett and Hicks completed a $490 million refinancing deal with UK and American banks in January -- saddling the club with annual interest repayments of $42 million, part of the reason why fans are so keen to take over the running of their beloved club.

Across Europe the practice of fans owning is fairly common, particularly in Spain where Barcelona is a supporter-owned club run by around 150,000 of its fans. Real Madrid -- the most successful team in Spanish football -- and Atletico Barcelona also belong to members called "socios."

In the UK, the move of football fans toward club ownership has been propelled by the threat of overseas owners taking charge and making decisions not favored by the local fans.

Football governance expert and management lecturer at the Birkbeck University of London, Dr Geoff Walters, said the reason fans often get involved is to make sure clubs are being "run as effectively and sustainably as possible."

Walters said some Premier League sides, including Arsenal, had a small percentage of shares owned by the club, while smaller clubs Brentford, Stockport County and Chesterfield were among the teams where fans had a larger stake.

Many of those fans were assisted by Supporters Direct, an organization that helps supporters' trusts from numerous clubs buy shares and have representation at their clubs.

However, at the greatest extreme of fan ownership is English conference side Ebbsfleet United.

In 2008, the club was taken over by more than 30,000 individuals through web site Myfootballclub.co.uk.

Each shareholder paid £35 ($48) to have their say in the club for a year, and could vote on decisions like team selections and ticket prices.

According to David Davis, chief executive of Ebbsfleet United, the model has had a few teething problems -- but he feels it could be sustainable.

The club had recently lost many members at the one-year renewal, with numerous people citing the recession as the reason for their departure, he said.

"The very positive thing is that we have this solid core of people who are in it for the longer term. If we can get through this season I think we have conquered it. It's a sustainable model," he said.

Davis said some members got involved with voluntary work at the club and he was surprised at the interests many shareholders had.

"I think it's still evolving. It's very clear people are in it for different reasons. Some are in it to pick the team, while others are happy just to try to help out at the club and talk of their frustration with the 'fat cat' clubs.

"There has been a surprising interest in the business side of it rather than the football side of things," David said.

Walters disagrees with Davis' optimism for Ebbsfleet, saying fan ownership is possible, but its best derived from within the club's own fan-base.

Walters felt the ShareLiverpoolFC model and the concept promoted by Supporters Direct, were more sustainable as they were geared towards fans of the club.

It would be more difficult to retain interest under the Ebbsfleet model where anyone could pay the money and become an owner, he said.

"Because they allow anybody to buy a share. If you're not a supporter of that club, do you really have an attachment to that club?"