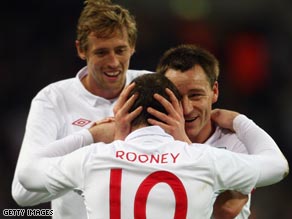 Striker Crouch will be flanked by Wayne Rooney who scored twice in the warm-up win over Slovakia and hopes to celebrate his 50th cap by firing England a step closer to next year's finals in South Africa.

"Rooney is one of the best players in the world," said Capello whose side top Group Six after four straight wins. "He never played for the under-21s. He jumped. Only the extra special players can do that."

"I remember when Sir Alex Ferguson bought him, I saw him at a UEFA meeting in Nyon. He said 'Fabio, I am crazy. I have just spent an awful lot of money on a very young player'.

"Now he is happy because he spent a lot of money on a very important player."

Crouch's role is equally crucial after Capello lost Emile Heskey and Carlton Cole over the weekend and then saw replacement Darren Bent break down during Tuesday's training warm-up.

Tottenham striker Bent's absence has now been confirmed, with damage to tendons in his knee cited as the problem.

Capello's assistant Franco Baldini immediately called Aston Villa to secure the release of Gabriel Agbonlahor, who has recovered from the hamstring problem that forced him to miss Friday's under-21 game in Norway.

However, given Agbonlahor will not have a single training session with the senior squad, having made his debut in Spain last month, it is to Crouch that Capello must turn against dangerous opponents.

"Crouch is the best forward I can put on there," said the England boss. "He can do the job that Heskey did. But the most important thing will be the movement near him because he cannot play in exactly the same way as Heskey."

No thought was given to recalling Michael Owen or, it appears, Theo Walcott, who was training close to the England squad at Arsenal's plush base in London Colney.

"I am not going to change the style," he said. "It will be the same as Slovakia, with (Wayne) Rooney and (Steven) Gerrard in the same positions, because the result was very good.

"During the game it is possible we will make some changes but we have enough options."

Capello included 33-year-old David Beckham's name among his possible starters -- with Crouch's head an inviting target -- although Aaron Lennon is expected to keep the right-sided berth.

Rio Ferdinand is fit and expected to partner John Terry in central defense for the first time since the win in Croatia last September.

Capello expects the unbeaten Ukraine to play exclusively on the counter-attack, with Andriy Shevchenko the obvious threat despite his diminishing powers.

"I know Shevchenko very well," he said. "He is a fantastic striker. He was with me at AC Milan and scored a lot of goals. He also scored against me when I was at Roma. He has not played a lot this season but he is very dangerous."

FIFA has asked for a minute's silence to be held before all international football matches today and tomorrow as a mark of respect for the fans who died in a stadium stampede in the Ivory Coast.