(CNN) -- Former Italian international striker Christian Vieri has left Serie A side Atalanta by mutual consent, blaming constant jeering from the club's fans for his decision to leave. 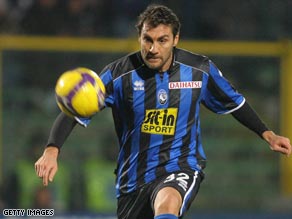 The 35-year-old, back at his third stint with the Bergamo-based side, has failed to make an impression this season, and has become the focus of fans' frustrations after scoring just two goals in nine appearances.

"I want to thank Atalanta for the way they have dealt with me throughout the season and throughout my previous experiences wearing the black and blue shirt," said Vieri in a statement on the club's official Web site.

Atalanta president Alessandro Ruggeri revealed the club had wanted the former Juventus, Inter Milan and AC Milan striker to stay but that his mind was made up.

"I'm disappointed as I'm sure everyone who loves football is. I don't know what he will do now, whether or not he will continue to play after this experience with Atalanta," said Ruggeri.

"I haven't spoken to him yet but my colleagues have and he was adamant, I don't think there was any way to make him stay."

Vieri has changed clubs 13 times since beconing a professional in 1991, playing for Italy's three biggest teams as well as Atletico Madrid in Spain and Monaco in France.