(CNN) -- South Korea scored a late goal Wednesday to defeat North Korea 1-0 in a World Cup qualifying match set amid the backdrop of heightened political tensions in the region. 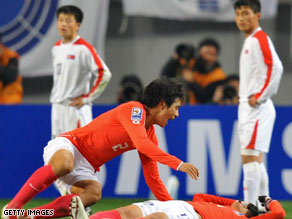 Substitute Kim Chi-Woo scored in the 88th minute when his left-footed free kick went past defenders and into the back of the net. Replays showed that a North Korean defender may have deflected the ball just enough to prevent goalkeeper Lee Woon-Jae from the save.

The match in Seoul was played with tensions high in the region ahead of an announced rocket launch by the communist North. Pyongyang has said it will launch the missile sometime between April 4 and April 8.

U.S. military officials worry less about the payload and more about the launch itself, saying any kind of launch will give the North Koreans valuable information about improving their ballistic missile program.

The game was played before a boisterous partisan crowd in Seoul that booed frequently when the North had the ball.

North Korean forward Jong Tae-se nearly scored just four minutes into the second half with a powerful header. But his shot was saved at the goal line by Lee. Television replays suggested that a portion of the ball may have crossed the line.

The victory moves South Korea atop Group 2 of the Asian section of qualifying for next year's World Cup in South Africa.

Saudi Arabia moved into a second-place tie with North Korea after it defeated the United Arab Emirates, 3-2.

Australia and second-place Japan lead Group 1 of the Asia section by a comfortable gap over third-place Bahrain. Only the top two from each group qualify, with the third placed teams playing off for the right to meet New Zealand for the fifth berth available.