(CNN) -- Champions League favorites Barcelona produced another devastating display to outclass Bayern Munich 4-0 at the Nou Camp and virtually guarantee a place in the semifinals of the competition. 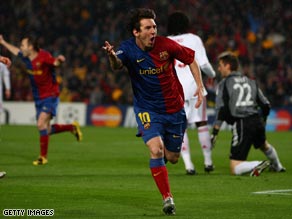 In the last round, the Catalan giants scored four first-half goals on their way to crushing French champions Lyon, and they repeated the trick on Wednesday as Lionel Messi (2), Thierry Henry and Samuel Eto'o again proved they are the most deadly strike-force in world football.

German champions Bayern were thrashed 5-1 by Wolfsburg in the Bundesliga on Saturday and they looked to be heading for another mauling as early as the fifth minute when Henry rounded goalkeeper Hans-Jorg Butt -- but his weak shot was cleared off the line.

However, the 90,000 home crowd did not have to wait long for a goal as Messi slid home Eto'o's pass just three minutes later.

Barca doubled their lead in the 12th minute, with Messi returning the favor for Eto'o to convert past Butt -- who was replacing axed first-choice goalkeeper Michael Rensing -- from an acute angle.

Barcelona coach Pep Guardiola was then sent to the stands by English referee Howard Webb for protesting about the non-award of a penalty when Messi appeared to be brought down.

However, he was celebrating again in the 38th minute when Henry's pace got him clear of the Bayern defense and Messi finished things off for his eighth goal in the competition this season.

Frenchman Henry added a fourth two minutes before the interval after Messi fed him out wide and the Argentine genius almost grabbed his hat-trick when he hit the crossbar in the second half.

Bayern had one great chance to get a lifeline in the tie but Barcelona captain Carles Puyol produced a great block to deny Ze Roberto in the 70th minute.

With the return at the Allianz Arena next week now looking a formality for Barcelona, it appears as if they will face Chelsea in the semifinals of the competition after the London side beat rivals Liverpool 3-1 at Anfield in the other tie on Wednesday.