(CNN) -- Brazilian superstar Kaka has again pledged his future to AC Milan and ruled out a summer move to Real Madrid. 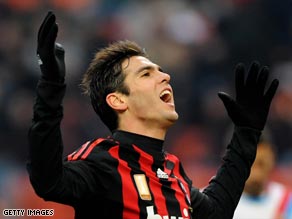 Kaka lifted Milan to Champions League glory in 2007 and is adored by the Rossoneri fans.

There has been renewed speculation that the 26-year-old former world footballer of the year will leave the Serie A giants to ply his trade in Spain.

Earlier this week, the Spanish media reported Florentino Perez was close to signing Kaka on a pre-contract agreement -- hoping to win support as part of his bid to win back the Real presidency in upcoming elections.

But Milan vice-president Adriano Galliani immediately rubbished the claims and Kaka himself has now said he has no plans to leave the Rossoneri. "I want to stay here, I have already demonstrated that," he was quoted in an interview with Italian sports paper Gazzetta dello Sport.

"I think in recent days too many people have spoken, and now I'm speaking out. I have not had any contact with Real, I have not tried to and I have already stated my pleasure and my desire to stay here."

It is not the first time that the brilliant playmaker has been the subject of transfer speculation -- most recently in the January transfer window when Premier League Manchester City tried to lure him to Eastlands in a world-record transfer.

Kaka decided against the move which would have netted him a massive pay increase, a popular move with Milan supporters who feared the loss of one of their key players.