Who can fill Ferguson's boots at United?

LONDON, England (CNN) -- Alex Ferguson says he's glad he won't have to decide who succeeds him at Old Trafford. 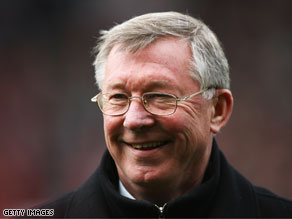 Ferguson's winning form at Manchester United will be a hard act to follow.

Speaking exclusively to CNN, the Manchester United manager says the club has changed enormously in the twenty three years since he arrived from Aberdeen.

He told us: "I think you need someone with experience here because it's a big club now. It's a massive club... I don't know what the club thinks about who the next manager is going to be but hopefully it's not for another two or three years because I intend to stay on as long as I can."

Those last words will be music to the ears of most Manchester United fans. Whether or not the team claims an historic tally of five major trophies this season -- and Ferguson insists they're still in a "fantastic position" to do it -- United's manager is irreplaceable to many.

One supporter, Dan Rogers, wrote on CNN's Football Fanzone, "Great coaches and teachers like Sir Alex can never be replaced."

It's a widely held view but, let's face it, time catches up with all of us. So when the Scot finally hangs up his whistle who will United turn to?

Has Fergie's success made Manchester United manager an impossible job? Who do you think should be his successor??

Possible successors include Jose Mourinho. In his interview with CNN, Ferguson made it clear he was a fan of the former Chelsea boss who is now leading Inter Milan towards Italy's Serie A title.

"I like Jose, I think he's a good guy. [However] the funny thing about football is how the game changes.... for me to think about where Jose Mourinho is going to be or Arsene Wenger... is impossible because their careers can take directions and turns which surprise you."

Scott, from fans' Web site Republik of Mancunia, told us "Jose Mourinho has the personality to replace Sir Alex. However, the next United manager has to have more than a big personality. I personally would be very disappointed if Mourinho was to replace Ferguson."

So who are the main contenders to take the reins at Old Trafford when Fergie decides to call it a day?

AC Milan manager. He's won the Champions League twice and the Italian championship. Has been with Milan since 2001 so could be ready for a fresh challenge.

His success with England over the last 12 months has proved Capello can manage anywhere. He's won trophies with several of the biggest clubs in Italy and Spain. And the end of his England contract coincides with Ferguson's tentative retirement plans.

Arguably, the leading British candidate, although Martin O'Neill fans might have something to say about that. Moyes has won no major trophies during his time at Goodison but getting his team to threaten the Premier League's top four is almost as big an achievement.

But what do YOU think? Should the club go for youth or experience next? And should they sacrifice flair for more success?

All About Manchester United