(CNN) -- Over 28,000 Liverpool fans marked the 20th anniversary of the Hillsborough disaster in a special memorial service at Anfield on Wednesday. 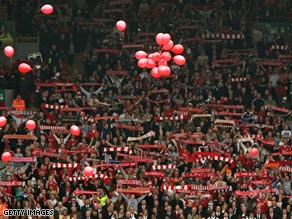 Liverpool supporters at the Kop end paid their respects in an emotional afternoon at Anfield.

A total of 96 supporters died on April 15, 1989 before the FA Cup semifinal between Liverpool and Nottingham Forest at Sheffield Wednesday's stadium, the worst-ever tragedy in English sporting history.

To commemorate the anniversary, the city of Liverpool came to a standstill at 3.06 pm (1406 GMT) with the bells of the two cathedrals and its civic buildings ringing out in memory of those fans who lost their lives.

On Anfield's famous Kop, 96 candles were lit while commemorations took place at Hillsborough and also in Nottingham.

Members of the current Liverpool team stood somberly as hymns were played before a roll call of the dead was read out. Club legend Kenny Dalglish, who was Liverpool manager at the time of the disaster, then read a short prayer.

The mayor of Liverpool, Steve Rotherham, who was at the game 20 years ago, helped organize the emotional memorial.

"Hillsborough affected so many lives, not just on Merseyside but across the whole of the UK," he said.

"I attended the match 20 years ago and the passing years do not diminish the importance and the poignancy of this occasion."

Liverpool captain Steven Gerrard, whose 10-year-old cousin Jon-Paul Gilhooley was the youngest victim of the tragedy, spoke of his feelings this week.

The Liverpool fans died in a crush which started just before the kick-off as the gate at the Leppings Lane End was opened with terrible consequences. The match started but when the scale of the tragedy became clear, it was swiftly abandoned at 3.06 pm.

In the immediate aftermath, the British government commissioned Lord Justice Taylor to conduct an inquiry which would have a far-reaching impact on football.

Taylor was deeply critical of the police operation at Hillsborough, but his most significant recommendations were the removal of perimeter fencing and the creation of all-seater stadia.

His report also cleared Liverpool fans of blame for the tragedy after lurid tabloid headlines provoked revulsion on Merseyside.

"It was wrong for people to blame, as some did, Liverpool fans on that day," he said.

"That's probably what matters most -- that people understood that the behavior of Liverpool fans in helping each other was magnificent.

"Let's never forget the fans who cruelly lost their lives on a day when we know the people of Liverpool were trying to help each other," he added.

However, the people of Liverpool are still angry and bitter at the lack of justice for those who died -- and that frustration surfaced when Andy Burnham, the Secretary of State for Culture, Media and Sport took to the stand to address the crowd.

As Burnham spoke, the crowd rose as one to sing "Justice for the 96". The Kop chant boomed around the stadium and Burnham, an Everton fan, was left in no doubt about the strength of feeling over the lack of accountability from officialdom over the tragedy.