(CNN) -- Arsenal's Andrey Arshavin became the first player to score four goals in a league game at Liverpool for 64 years but it was not enough to stop the Reds returning to the top of the Premier League after another 4-4 draw. 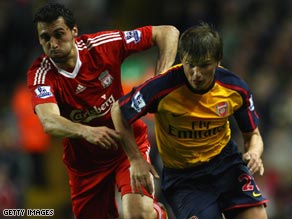 Russian Arshavin hit four goals for the first time in his career in a dramatic eight-goal Anfield thriller.

A week after crashing out of the Champions League 7-5 on aggregate after sharing eight goals in their quarterfinal second leg at Chelsea, Liverpool took their fans on another rollercoaster ride.

A draw was going to be enough to take the Merseysiders above Manchester United -- they have two games in hand -- but it needed 90 minutes of drama before they edged ahead on goal difference.

Russian striker Arshavin opened the scoring after 36 minutes and struck again after 67, 70 and 90 as Arsenal bounced back following their weekend FA Cup semifinal defeat.

Fernando Torres, with a header after 49 minutes, and Yossi Benayoun (56) hit back after halftime before Arshavin sent Arsenal 3-2 ahead with 20 minutes left.

Torres's second of the night after 72 hauled Rafael Benitez's side level two minutes later -- but it took Benayoun to salvage a draw for Liverpool in the third minute of time added on after that man Arshavin had hit number four after 90 minutes.

It was the first time in his career that Arshavin had scored four in a match and he told Sky: "I liked the game but of course it's not good for the team...almost basketball."

Arsenal boss Arsene Wenger said of his Russian star: "His performance was outstanding. He had a quiet first half but when he comes into the game he is always very dangerous. He has personality and is a winner."

Liverpool manager Rafael Benitez saw his team concede a quartet of sloppy goals but he could not fault their commitment to the cause.

"You never know," he said of the Reds' dwindling hopes of overhauling United. "Today we made too many mistakes, but it's also very positive because the team showed character until the last minute."

Benitez added: "They (United) had it (the advantage in the title race) before and they continue in the driving seat. We have to keep pushing and showed today we will fight until the last game."