(CNN) -- The Bundesliga title race continues to prove the most exciting in living memory after league leaders Wolfsburg were beaten 2-0 at relegation-threatened Energie Cottbus on Sunday. 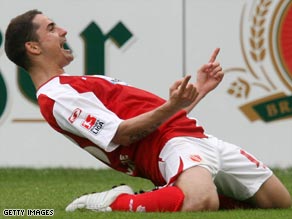 The three points lifts Cottbus out of the bottom three, while Wolfsburg missed out on a chance to go five points clear as they suffered their first league defeat since losing 2-1 at Werder Bremen last December.

The shock result came on the back of Cottbus' 4-0 hammering at Schalke last weekend, a defeat so bad that the club's board decided to offer a refund to all supporters who had travelled to Gelsenkirchen for the game.

Sunday's result means the top of the Bundesliga has become even more congested with just three points separating the top five teams with only five matches remaining.

Wolfsburg continue to lead the way with 57 points, two ahead of Hertha Berlin who were the weekend's big winners after their 1-0 win over early-season leaders Hoffenheim on Friday evening.

Bayern Munich, Stuttgart and Hamburg are all level on 54 points, with Stuttgart the only one of those three teams to win, 2-0 against Eintracht Frankfurt on Saturday.