(CNN) -- Chelsea's grit and determination held off Barcelona's attacking prowess, as the sides played out a 0-0 draw in their Champions League semifinal first leg clash at the Nou Camp on Tuesday. 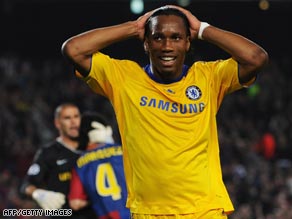 Didier Drogba holds his head after wasting a golden chance to put Chelsea ahead at the Nou Camp.

The result, the first time Barcelona had failed to score at home this season, could have been even better for the visitors had striker Didier Drogba not wasted a golden opportunity in the 38th minute.

The Ivory Coast international pounced on a short back-pass from Rafael Marquez, but Barcelona goalkeeper Victor Valdes superbly stopped his strike on goal, then reacted sharply to beat away the rebound that had fallen into Drogba's path.

Five minutes earlier, Barcelona had failed to convert their first clear-cut opportunity when a great diagonal run from Lionel Messi saw the Argentine play the ball out to Thierry Henry wide on the left.

Who are the world's best strikers?

The Frenchman cut inside and hit a powerful shot but Petr Cech parried the effort around a post.

A tetchy first half saw Jose Bosingwa, Alex and Michael Ballack all booked for Chelsea with Barcelona defender Dani Alves involved in running battles with most of his opponents -- and the Brazilian went close to giving Barca the lead on the hour mark with a free-kick that flew just over the crossbar.

Chelsea's resilient defense momentarily creaked in the 69th minute when Samuel Eto'o outpaced Alex but his shot was turned away by Cech with an unmarked Henry screaming for a square pass.

The home side claimed a penalty four minutes later when Henry appeared to be tugged back by Bosingwa, but the referee waved away their appeals.

Barcelona manager Pep Guardiola made late changes to try and win the game and both his substitutes, Bojan Krkic and Alexander Hleb, could have given the Catalan giants a late victory.

With time ebbing away, Bojan somehow contrived to head Alves' left-wing cross over the bar from close range and, in the final minute of injury time, Hleb's shot was saved again by the outstanding Cech -- with the Belarussian then wildly firing the rebound wide of the goal.

Chelsea captain John Terry felt the players had done their homework properly to deprive Barcelona of scoring. Terry told ITV1: "They had a lot of possession but we stayed very tight.

"We watched videos before the game, they like to play little balls through and we knew that and stopped them doing it. It's a fantastic result and we go back to Stamford Bridge ready to go again."