(CNN) -- Hamburg have put one foot in the UEFA Cup final after a header from Germany winger Piotr Trochowski proved enough to give them a 1-0 win at Bundesliga rivals Werder Bremen in the first leg of their semifinal. 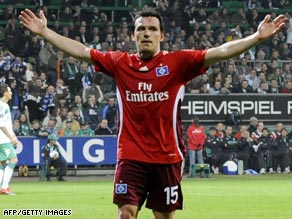 Piotr Trochowski celebrates the only goal as Hamburg took a major step towards the UEFA Cup final.

Martin Jol's side scored the only goal of a pulsating match in the 38th minute when Trochowski, the smallest player on the pitch, rose superbly at the back post to head Guy Demel's right-wing cross past goalkeeper Tim Wiese.

Both side had countless half-chances to score but Hamburg wasted the best of them on the hour mark when Bayern Munich-bound striker Ivica Olic broke through in acres of space, but fired his shot straight at Wiese.

Hamburg's victory puts them on line for their first European final since 1983, when they beat Juventus 1-0 to win the European Cup.

This was the second of four matches in quick succession between the north Germany neighbors -- who met each other in the German Cup last week and will play the return leg of the semifinal next Thursday before a Bundesliga clash on Sunday May 10.

And the result was sweet revenge for Hamburg, who saw Wiese save three penalties in last week's shoot-out as Werder knocked their rivals out of the German Cup, also at the semifinal stage.

The eventual winners will play either Shakhtar Donetsk or Dynamo Kiev in May's Istanbul final.