(CNN) -- Shakhtar Donetsk fought back from going a goal behind to draw 1-1 at fellow-Ukrainians Dynamo Kiev in the first leg of their UEFA Cup semifinal on Thursday. 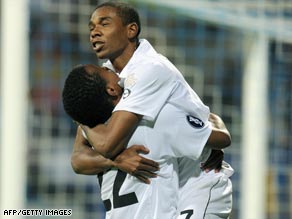 Shakhtar are the Ukrainian champions but Kiev lead the current table by an impressive 12 points and it was the home side who took a 22nd-minute lead when Oleksandr Aliyev's driven free-kick was turned into his own net by Dmytro Chygrynskiy.

Then, on the stroke of half-time, Kiev nearly doubled their advantage when Correa's deflected shot brushed the post.

Kiev continued to look the better side after the interval but, against the run of play, Shakhtar's three Brazilian players crafted a beautiful 68th-minute equalizer.

Jadson sprang the offside trap with a pass to substitute Willian on the right and his low cross was slid home by Fernandinho, putting Shakhtar firmly in the driving seat ahead of the second leg on May 7.

The winners will play either Werder Bremen or Hamburg, who face each other in the all-German other semifinal, in the final in Istanbul on May 20.