(CNN) -- Manchester United have won the Premier League title for a third consecutive season, although their title party was spoiled somewhat by visitors Arsenal in a dour 0-0 draw on Saturday. 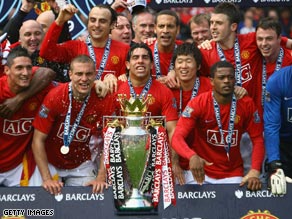 The Premier League trophy is remaining at Old Trafford for a third season in succession.

United only needed a point to retain the trophy and be crowned English champions for the 18th time, drawing level with north-west rivals Liverpool on that figure, and they achieved that target despite being out-played by an Arsenal side with only pride to play for.

Arsenal came to Old Trafford still smarting from their two-legged Champions League semifinal mauling by United, and had the better of the opening exchanges.

Their best first-half opportunity came when Andrey Arshavin found Robin van Persie with a precise far-post cross. What do you think? Are Man Utd worthy winners of this season's Premier League?

The Dutchman met it cleanly enough but was unable to keep his header under the bar from six yards out, despite being left unmarked by the United defense.

United fought back and Wayne Rooney stole in behind Bacary Sagna to meet Michael Carrick's curling cross with a firm header and was only a whisker away from finding the corner of Lukas Fabianski's net.

But that was as good as it got for United in the opening 45 minutes. Ryan Giggs lashed wildly over from Rooney's pass, while a trademark Cristiano Ronaldo free-kick failed to trouble Fabianski's goal.

The second half took a similar vein, with Arsenal stroking the ball around with style, and a flowing 58th-minute move resulted in left-back Kieran Gibbs firing just wide.

United looked content to sit back and try to catch Arsenal on the counter-attack. Ronaldo again fired over after Fabianski ran out to deprive Carlos Tevez, while Rooney was deprived by the Arsenal goalkeeper.

United manager Alex Ferguson replaced Tevez with Ji-sung Park. As Tevez exited the pitch he gave a prolonged series of waves to the United faithful, perhaps signifying he has played his late match at Old Trafford despite the home fans desperate for the club to sign the Argentine forward permanently in the summer when his two-year loan deal expires.

Despite the significance of the occasion, Arsenal were the better side on the day, and could have stolen victory three minutes fom time when captain Cesc Fabregas hit the outside of the post after another free-flowing move.

Ferguson admitted equalling Liverpool's record had been his target at the start of his long Old Trafford reign in 1986, although he always knew it would be tough.

"That was the target because they were the greatest side in the land at the time," Ferguson told Sky Sports. "But I never thought we could get 11 Premier League titles -- never in a million years."

Cristiano Ronaldo also savored the party atmosphere after the game but stopped short of committing his long-term future to United.

The Portugal winger told Sky Sports: "It's brilliant, the atmosphere here is unbelievable, the supporters screaming, singing songs... it's amazing but the future you never know. But as I said before, I'm really, really happy here.

"I try to do my best for this club all the time. We have won the league and now we will try to win the Champions League.

"We have to enjoy this moment. This moment is very special. In the next two or three days we have to concentrate on the Champions League because everyone wants to win that competition."