The renaissance of Russian football

LONDON (England) -- CNN -- When CSKA Moscow lifted the UEFA Cup in 2005, becoming the first Russian team to win a European trophy, manager Valeri Gazzaev described it as "a landmark victory for Russian football." 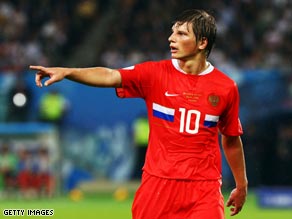 Three years later, Zenit St Petersburg matched the achievement a month before the Russian national team reached the semifinals of Euro 2008. After years on the margins, Russian football was back in the limelight.

Jonathan Wilson, author of "Behind the Curtain, Travels in Eastern European Football," told CNN that recent successes mark a renaissance of Russian football.

A far-cry from the early years after the collapse of the Soviet Union in 1991, when teams previously funded by state bodies -- such as the police force or the army -- were left chronically short of money.

Wilson said that under communist rule Spartak Moscow had been funded by a trade union representing catering workers and were less directly dependant on state support than other Russian clubs.

Consequently, when the Russian Premier League was formed in 1992, Spartak found themselves in a better position than many of their rivals and stormed on to win nine of the first 10 titles up for grabs.

While Spartak flourished, the rest of the division remained in desperate need of money; that is, until a new source of funding came in the shape of Russia's rising force of oligarchs -- men who had amassed fortunes buying cheap but highly profitable energy companies

These oligarchs and energy corporations now play a vital role in funding the game. Zenit St Petersburg is backed by Gazprom, the world's biggest producer and exporter of natural gas and Spartak Moscow has oil and gas company Lukoil as its primary sponsor.

CSKA Moscow's 2005 UEFA Cup triumph was financed by Sibneft, whose majority shareholder at the time was Chelsea owner Roman Abramovich, currently the 51st richest man in the world according to Forbes.com.

What are your views of Russian football? Sound off below.

But the injection of money into the Russian game isn't only useful for buying foreign talent, Wilson says the national game is also having a revival because of the oligarchs' money.

Abramovich funds Russia's National Football Academy, which, along with providing plastic pitches and coaches for young footballers, is also responsible for paying the wages of national team coach Guus Hiddink.

Dutchman Hiddink led Russia to the semifinals of Euro 2008, with the team having never made it past the first round of international competition prior to his appointment in 2006.

Marc Bennetts, author of "Football Dynamo", about the state of Russian football, is based in Moscow.

He told CNN that Hiddink's arrival was a turning point in the national team's fortunes.

"Hiddink really shook up the national football team. He left out some of the veterans and began picking players who were young and fresh, like Andrei Arshavin and Roman Pavlyuchenko," he said.

In Arshavin Russia has found its first football superstar since the Soviet era. He signed for English club Arsenal in February 2009 and has made an instant impact in the English Premier League.

Bennetts says one cloud on the horizon is that Russian football's dependence on energy companies means the global economic crisis and low oil prices could have a negative impact on the sport.

But if the oligarchs keep supplying the Roubles, there's no reason why Russian football won't continue to blossom.