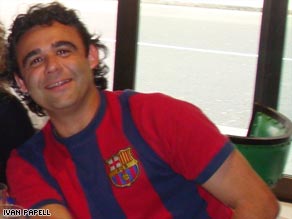 Ivan Papell is a Barcelona fan and managing director of the Spanish arm of a multinational company.

He is in high spirits today after seeing his team beat Manchester United 2-0, but confesses to being a little tired. He didn't make it to bed until six o'clock this morning after partying the night away with thousands of other Barcelona fans,

"It was a great night for Barcelona, but I've lost my voice from screaming," he told CNN.

Manchester United fan Geoff Pearson is a Lecturer in Law at the University of Liverpool in England and lives in Manchester. He traveled to Moscow to see his team beat Chelsea in last year's Champions League final, but United were unable to repeat their success last night.

"We were outplayed, apart from for the first 10 minutes of the match," he admits.

His match ticket cost him $106, but that only accounts for a small part of his expenses. Pearson couldn't get tickets for a direct flight to Rome -- instead, he had to fly to Milan, then hire a car and drive to Rome, where he stayed for three nights. In total, traveling to the final cost him about $750, but he does not regret making the journey. 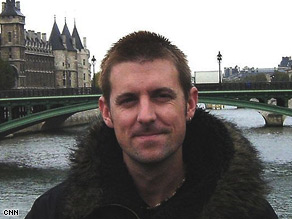 "The atmosphere at the match was brilliant," he told CNN. "The Manchester United fans did themselves proud. They outnumbered the Barcelona fans and made more noise."

How much have you paid to see your team play abroad? Sound Off below

While Pearson was impressed by the atmosphere inside Rome's Stadio Olimpico, he says he and other traveling Manchester United fans had difficulty getting to the match.

He says the fans' bus was delayed up by police and that there was a crush to get through the turnstiles into the stadium, putting it down to "the usual chaos of Italian away matches."

Papell had no such trouble getting to the game and, sitting with Manchester United fans, he says he was impressed by their sporting behavior. He says that many United fans congratulated him after the match, telling him Barcelona had deserved to win.

After seeing Barcelona beat the reigning European Champions Papell was justifiably proud of his team's performance.

"Barcelona were lucky to have scored first, but after that it was the sort of match Barcelona wanted. Manchester United were always behind the ball and Barcelona dominated the game," he said.

"I was expecting more from Manchester United but Barcelona can play the ball very fast and they make it hard for other teams."

While Papell catches up on some sleep, Pearson has to catch a train to Milan this afternoon, before flying back to England tomorrow morning.

"It was definitely worth it," he said. "It was a European final and they don't come round every year." But if the United and Barcelona do make it to next year's final, Pearson and Pappell will no doubt be in Madrid to cheer them on.