(CNN) -- Shakhtar Donetsk are setting their sights on Champions League glory after beating Werder Bremen to become the final-ever winners of the UEFA Cup. 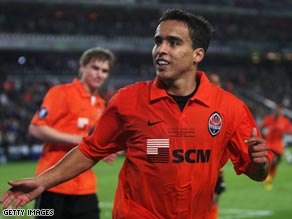 Jadson's extra-time winner in the 2-1 triumph over Werder Bremen in Istanbul was the first success by a Ukrainian side in European club competition.

Coach Mircea Lucescu believes it will act as a catalyst for further success at a higher level.

"This first trophy is fantastic," he told Press Association Sport.

"There is a great feeling of satisfaction and I am extremely happy. But we want other things. We want to do something in the Champions League.

Shakhtar's success was built on a strong contingent of players from Brazil and it was Adriano who put them ahead after 25 minutes with a clever chip over the onrushing Tim Wiese.

Werder's own Brazilian Naldo equalized for the German side with a thunderous free kick, with his compatriot Jadson scoring the winner for Shakhtar in the 97th minute.

"I am very happy for my Brazilian players," Lucescu said .

Bremen coach Thomas Schaaf admitted his team had not dictated the play as they had hoped.

"Our ball control was not as good as usual, particularly in midfield, and we weren't able to target the opposition goal. We had some chances, but didn't make the most of them. We will have to learn from that in the future"

UEFA has rebranded the competition for next season as the Europa League.