(CNN) -- Fernando Torres has committed his future to Liverpool by signing a new contract that ties him to the English Premier League runners-up until at least 2013. 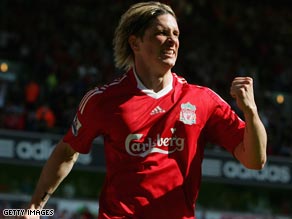 The Spain striker was rewarded after scoring his 50th goal for the Reds on Sunday against Tottenham, having made a huge impact since signing from Atletico Madrid two years ago.

Torres, 25, still had four years remaining on his original six-year deal, but has agreed improved terms and has also been given the option of extending his stay until 2014.

"Fernando is one of the best strikers in the game today and, at his age, can only get better," the Spaniard told the club's Web site.

"Every major side would want him in their team, but he has shown how much he wants to achieve success at Liverpool by committing his future to the club. He's a special talent, but still has the hunger to improve his game."

With Benitez himself having also committed to staying at Anfield, he is looking forward to trying to end the domestic dominance of Manchester United.

"We've made huge progress this season and now we need to take the next step," he said.

"We are building something special here and securing such important players on long-term deals means we can move forward with confidence. This sends out a very positive message to everyone connected with the club."