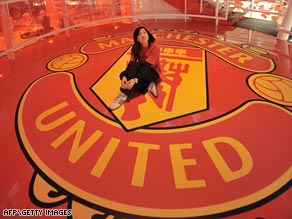 United's worldwide appeal has brought them a reported record $131m sponsorship with a U.S. insurance giant.

That would send United to the top of football's sponsorship income league ahead of the likes of Bayern Munich, Real Madrid and Chelsea.

United chief executive David Gill did not reveal the figures involved but confirmed that the Chicago-based Aon brand will take over from another another U.S. company AIG on the club shirts from the start of the 2010/11 season.

"Today's announcement clearly strengthens our position as one of the biggest clubs in world football," Gill told the United Web site after unveiling the global partnership and principal sponsorship agreement.

Gill confirmed: "We are delighted to be entering such an important relationship with a company of the stature of Aon and to have its logo adorn our shirts from the start of the 2010/11 season.

"We look forward to being closely aligned with the world leader in risk management, a firm which shares our values and is an exciting partner for Manchester United."

President and chief executive officer of Aon, Greg Case, added: "It is a unique opportunity when two leaders in their respective fields can come together in a partnership such as the one we are announcing today.

"Manchester United has one of the most recognised sports brands in the world. David (Gill) and his team are all about winning and about excellence; the same holds true for the Aon team. We play to win in our business, and that is why we believe this partnership will create tremendous benefits for both organisations worldwide.

"While we are delighted that our brand will be showcased to over 330 million fans of Manchester United as well as the countless followers of football worldwide, we also are extremely excited about the opportunity to maximise the value of this partnership globally."