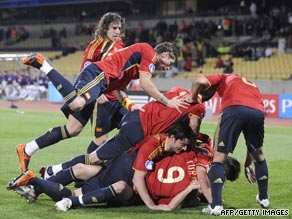 Fernando Torres (No. 9) is congratulated after his opening goal in the 5-0 rout of New Zealand.

The victory, Spain's 13th in succession, means the European champions have now extended their unbeaten run to 33 matches, just two short of Brazil's world record of 35 matches without defeat between 1993 and 1996.

Spain took a sixth minute lead when Arsenal midfielder Cesc Fabregas slotted the ball to Torres, who curled his shot home from the edge of the box.

Torres doubled his tally eight minutes later when side-footing past goalkeeper Glen Moss after David Villa neatly cut the ball back -- and he completed his hat- trick in the 17th minute when heading home his 22nd international goal from Joan Capdevila's cross.

With New Zealand being exposed at every opportunity, Spain made it 4-0 in the 24th minute when Fabregas tapped home after more good work from Villarreal defender Capdevila.

The All Whites steadied the ship somewhat after the break, but they could not prevent Real Madrid target Villa adding a fifth three minutes after the restart when he fired home after a horrible miskick from defender Andy Boyens.

With hosts South Africa drawing 0-0 with Iraq -- Spain, which has not lost since November 2006 -- top Group A with three points.

They next meet Iraq in Bloemfontein while New Zealand will look to salvage some pride against South Africa on the same day in Rustenburg.

The top two from the group qualify for the semifinals.