(CNN) -- A 40th-minute header from Mohamed Homos gave Egypt a shock 1-0 Confederations Cup victory over Italy at Ellis Park, Johannesburg, to leave the world champions' qualification hopes in the balance. 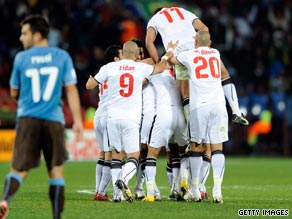 Homos -- who replaced 35-year-old captain Ahmed Hassan, the country's most capped player, in the only change to the Egyptian side beaten 4-3 by Brazil -- rose powerfully to nod a corner from Mohamed Aboutrika past Italian goalkeeper Gianluigi Buffon.

Egypt and Italy are now level on three points in Group B, behind Brazil who have won both their matches, with the Pharoahs favorites to go through to the semifinals.

They face the United States on Sunday while Italy must play Brazil, needing at least a point and hoping Egypt are beaten.

Egypt had goalkeeper Essam al-Hadary to thank for their surprise win as he pulled off a string of fine saves.

Juventus striker Vincenzo Iaquinta and Villarreal's Giuseppe Rossi both forced saves from Al-Hadary within the space of a minute midway through the half.

The Italians had also gone 1-0 behind against the United States and fought back to win and -- after Homos' goal -- they began the second half with a sense of real purpose.

They should have levelled when Iaquinta found himself unmarked in the penalty area box but Al-Hadary scrambled the ball clear after the striker's control let hom down.

Al-Hadary continued to make save after save to deny the frustrated Italians, who had one last chance as the seconds ticked down, but AC Milan's Andrea Pirlo sent his free-kick sailing over the crossbar.