(CNN) -- Brazilian playmaker Kaka was officially presented as a Real Madrid player, after being handed the number eight jersey in front of thousands of supporters and a huge media contingent at the club's Bernabeu stadium on Tuesday evening. 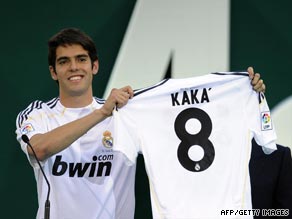 Kaka parades his new Real Madrid jersey after completing his $92 million transfer to the Spanish giants.

Kaka, who completed his medical earlier in the day having landed in the Spanish capital in the morning, has penned a six-year contract and has cost Madrid a reported $92 million.

There had been speculation that Kaka would be handed the number five shirt that Zinedine Zidane had once worn for Madrid, but the new arrival will instead take up the number eight shirt formerly worn by Fernando Gago.

The 27-year-old Kaka, who was named player of the tournament after helping Brazil win the Confederations Cup in South Africa over the last few weeks, told supporters: "Today is a very happy day for me.

"I'm very happy because this new stage of my career will be at Real Madrid. I hope to write my name into the history of this club with many victories and successes."

Kaka was the first signing confirmed by Madrid after Perez returned to the club presidency at the start of June.

Soon after bringing in the Brazilian, Perez also agreed a world-record 80 million euros fee with Manchester United for Cristiano Ronaldo.

That deal was finalized on Friday night and will come into effect from Wednesday, with Ronaldo, who like Kaka will be tied to the Spanish giants until 2015, being presented on July 6.

Aside from Kaka and Ronaldo, Madrid also struck a deal to sign Valencia defender Raul Albiol last week for a fee believed to be around 13 million euros, while the likes of Franck Ribery, David Villa and Xabi Alonso are all being linked with moves to the Bernabeu as Perez relaunches the famous 'galacticos' policy that he presided over during his first tenure at the club.

Then, while president from 2000-06, Perez sanctioned the big-money signings of superstars such as Zidane, David Beckham, Luis Figo and Ronaldo, a policy that reaped indifferent rewards with Madrid winning seven trophies under Perez in total but none in his final three years.