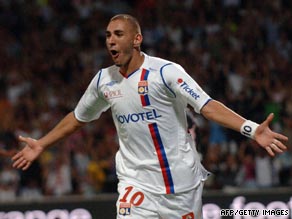 Benzema will become Real Madrid's fourth signing of the summer, taking their spending to 200m euros.

Real made the announcement on the official club Web site on Thursday, adding that the 21-year-old Lyon star "will have his medical examination in the next few days."

He will sign his contract after that and be presented to the public.

On Wednesday, former French champions Lyon revealed that they had accepted an offer of approximately €35 million ($50 million) from Madrid. Latest transfer gossip and rumors

Lyon said on their official Web site that the fee could rise to €41 million ($58 million) with performance clauses.

A statement read: "Lyon announce they have reached an agreement with Real Madrid on the details of the transfer of their international striker Karim Benzema.

"A few days ago Karim Benzema informed club president Jean Michel Aulas of his desire to move to the Madrid club, which has been his favorite club after Lyon, earlier than he had foreseen.

"The player wanted to seize the opportunity which Real Madrid offered him to be one of the major elements in their new ambitious project based around the greatest players of the world.

"Lyon accepted Karim Benzema's decision and negotiated the conditions of a transfer which satisfies all the different parties. The club wishes Karim the greatest success with Real Madrid."

Real had been looking for a striker all summer, and set their sights on Benzema on the recommendation of Zinedine Zidane when a deal to sign Valencia's Spain star David Villa collapsed.

Benzema came through the ranks with Lyon and burst onto the scene in the 2007-08 season with 31 goals in 51 games, a streak that saw him named Ligue One player of the year as well as topping the league's scoring charts.

The last campaign was less impressive for both club and player, as Lyon failed to win the French title for the first time in eight years, but Benzema nevertheless scored 23 goals in all competitions -- an average of a goal every other game.

The deal will take Madrid's summer spending to over $280 million since Florentino Perez returned as club president.

The 27-year-old, who struggled to settle after joining in a club-record $29.5 million transfer from French rivals Lille two years ago, will sign a three-year contract.