(CNN) -- Danny Jordaan, the chief executive of the 2010 World Cup organizing committee in South Africa, said in a statement on Wednesday that construction remains on schedule for the tournament despite large-scale strikes delaying building work at stadium sites. 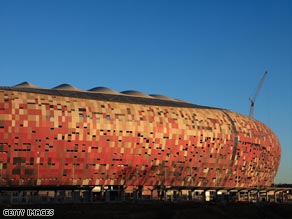 The 94,000 Soccer City in Johannesburg is the showpiece stadium of the 2010 World Cup.

About 70,000 workers have downed tools in a pay dispute after negotiations broke down earlier this week, with less than 12 months to go before the finals kick-off.

The workers are reportedly seeking a 13 percent pay rise on their $300 average monthly wage, and there are growing worries that a prolonged strike could jeopardize key projects such as the centerpiece 94,000-seater Soccer City stadium in Johannesburg. Are the strikes overshadowing progress?

Arenas in Cape Town and Durban are also facing a race against time to be finished by the deadline of December set by FIFA, world football's governing body, but Jordaan sought to ease concerns.

"The construction workers have been the lifeblood of the 2010 FIFA World Cup project. Their hard work has ensured that we are on track to meet our deadlines and that our stadiums will be among the best in the world next year," Jordaan said in a press statement.

"It has always been the position of the organizing committee that we respect the right of construction workers on the stadiums to strike if they feel they have legitimate grievances.

"This is a right enshrined in our country's constitution. We believe that the strike will be resolved as soon as possible and remain confident that the stadiums will be completed on time."

Six entirely new stadiums are being built for the World Cup, while four are being modernized, along with a host of other infrastructure projects including a high-speed rail link, to help cope with the influx of nearly half a million football fans to South Africa next June.

The National Union of Mineworkers (NUM), which represents many of the construction workers who have stopped work, were in confident mood after an attempt by employers to ban the action was rejected by judges.

Bhekani Ngcobo, the NUM's negotiator, said in a media release: "This strike action is going to continue until an offer that is required comes, even if that comes in 2011, which means we will have the longest strike in history that may qualify to be included in the Guinness Book of Records.

"If they do not offer us 13 percent, we may demand 15 percent next week and 20 percent the following week. So, this matter is urgent," added Ngcobo.

Despite the scale of the strikes, Danny Jordaan, the chief executive of the 2010 World Cup organizing committee in South Africa, remained confident all construction for the event remained on schedule.

South Africa is the first African country to be awarded the World Cup finals and the main concerns have centered around crime and security as well as the readiness of the stadiums.

But a successful hosting of the Confederations Cup last month, won by Brazil, helped silence critics and local organizers have remained steadfast in their belief that they will stage a successful World Cup.