(CNN) -- A tight-lipped Shunsuke Nakamura left Japan on Friday ahead of his move to the Spain's La Liga with Barcelona-based Espanyol. 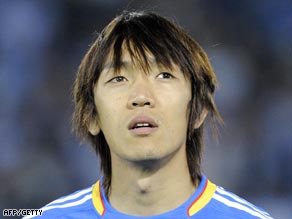 Nakamura will turn his considerable talents to the Spanish Primera with Espanyol.

Nakamura, who joined Espanyol after four years with Celtic in the Scottish Premier League, had been on holiday in his native Japan, but kept himself out of the media spotlight.

His only public appearance came at a talk show on Wednesday night with youngsters from his football clinic in Yokohama.

He said he hoped to gain a first team place at Espanyol and prove himself in Spain.

"I have to convince the manager, my team mates and the Espanyol fans to accept me," Reuters.com quoted Nakamura.

"I'm the foreigner so unless I am better than the Spanish players I won't get to play much. I have always wanted to play in Spain at a big club so it's a chance to prove myself."

The 31-year-old Nakamura opted to go to Spain despite the offer of a return to his hometown club Yokohama Marinos, a decision which caused consternation among the J-League club's fans.

Espanyol announced on their club Web site www.rcdespanyol.com that a two-year deal had been reached with Nakamura, who will be officially unveiled on Monday.

Espanyol said that his signing was a "primary objective" with hopes he can continue his goalscoring feats from free kicks which highlighted his time at Celtic.

Nakamura is set to play a key role for Japan in the 2010 World Cup finals, having been capped 87 times with 29 goals to his credit.

In other transfer news on Friday, Everton have completed a deal to take Manchester City striker Jo on a season-long loan.

The 22-year-old Brazilian impressed when he joined Everton on loan for the back end of last season, scoring five goals.

Sunderland are also set to complete the signing of Manchester United striker Fraizier Campbell after he had a medical on Wearside.

England under-21 international Campbell spent much of llast season on loan at Tottenham Hotspur.