(CNN) -- The National Union of Mineworkers (NUM), a major trade union representing the 70,000 construction workers currently striking at 2010 World Cup stadium building sites in South Africa, will meet with local organizers on Tuesday in a bid thrash out a resolution. 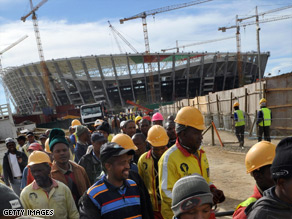 The disgruntled labor force have been demanding a 13 percent pay rise from their employers before they return to work, resulting in a dispute that could threaten the completion of key arenas in time for next year's event.

In a statement on the organization's official Web site the NUM announced they will meet with the South African Federation of Civil Engineering Contractors (SAFCEC), the Local Organizing Committee (LOC) and the Department of Labor in an attempt to reach agreement.

However, the statement went on to stress: "We call on other employers ... to be careful how they negotiate and what they bring to the table this year so as to avoid unnecessary confrontation.

"We love the 2010 spectacle but our workers won't be sacrificial lambs in the process of building the stadia and ensuring that the world cup comes to South Africa" said spokesman Bhekani Ngcobo.

"This strike action is going to continue if no offer is forthcoming, if they do not offer us 13 percent, we may demand 15 percent next week and 20 percent the following week. So, this matter is urgent" says Ngcobo.

Danny Jordaan, the chief executive of the 2010 World Cup organizing committee in South Africa, previously said in a statement that construction remains on schedule for the tournament despite large-scale strikes delaying building work at stadium sites.

Despite worries that a prolonged strike could jeopardize key projects such as the centerpiece 94,000-seater Soccer City stadium in Johannesburg, Jordaan sought to ease concerns stating: "We believe that the strike will be resolved as soon as possible and remain confident the stadiums will be completed on time.