(CNN) -- English Premier League champions Manchester United have cancelled the Jakarta leg of their 2009 pre-season tour of Asia as a result of the bomb attacks in the Indonesian capital. 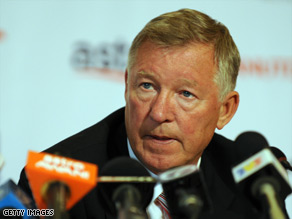 Alex Ferguson announces the the cancellation of the Indonesian leg of United's tour.

A presidential spokesman confirmed that eight people were killed as blasts tore through two luxury hotels - the J.W. Marriott Hotel and the Ritz-Carlton Hotel - the second of which the squad were due to stay in for their time in the city.

The club announced the move in a statement on their Web site: "The Directors have informed the Indonesian Football Associaition (FA) that the Club (Manchester United) cannot fulfil the fixture in Jakarta.

"We are working on a revised itinerary outside Indonesia with the promoters, and will make a further announcement when these decisions have been made.

"We are deeply disappointed at not being able to visit Indonesia and thank the Indonesian FA and our fans for their support. Our thoughts go to all those affected by the blasts," the statement added.

The tour of Asia by the Red Devils consisted of four fixtures, starting with a game against a Malaysia XI on Saturday, with further ties against an Indonesian All Star side on Monday, FC Seoul in South Korea on July 24 and Hangzhou Greentown in China two days later.

It was anticipated the Gelora Bung Karno stadium would be filled to its 88,000 capacity should the game have gone ahead in Indonesia, such is the popularity of the three times European champions in the region.

United manager Alex Ferguson was reported by the British Press Association as saying the explosions were "terrible news" and it was "very disappointing" their friendly fixture had to be cancelled.

"It was abit of a shock for all of us, we had no other option but to safeguard our players."

The Scot went onto say: "We got the news as we landed and it is very disappointing. I have never been to Indonesia before and I know the Indonesian FA have worked very hard on this.

"It is terrible news but we have taken what I believe to be the right decision in terms of safeguarding our players," PA reported.

United's chief executive David Gill said: "We have taken the appropriate advice. We have met with the British High Commission who are highly experienced in these matters.

"It is not a decision we have taken lightly. We were aware of the situation but we spoke to the right people and received the correct advice," PA reported.