(CNN) -- Inter Milan are offering their star striker Zlatan Ibrahimovic in a swap deal with Barcelona which would see Samuel Eto'o move in the other direction. 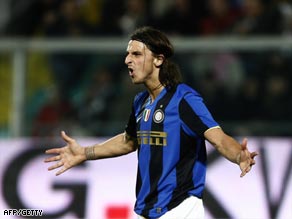 Ibrahimovic could be headed for European champions Barcelona in a swap deal.

Club president Massimo Moratti met his Barca counterpart Juan Laporta on Thursday night and told his side's official Web site that the switch had been the discussed.

Moratti said they had met to complete the transfer of Brazilian defender Maxwell to the Nou Camp from Inter.

He said he also hoped to conclude a deal which would see Barcelona midfielder Aleksandr Hleb go the San Siro, reportedly on loan for the season.

But it was the comments about a Ibrahimovic-Eto'o switch which captured the headlines in sports papers in Italy and Spain.

"This meeting was something between two presidents to understand if there are other possibilities to work together," Moratti was quoted.

The arrival of Swedish international Ibrahimovic would be the first high profile capture of the close season transfer window by European champions Barcelona.

While their arch-rivals Real Madrid have spent $300 million on the likes of Kaka and Cristiano Ronaldo, Barca have kept their powder dry with the acquisition of Maxwell their only confirmed deal.

"We obviously talked about other things because for them it was interesting to know something about Ibrahimovic," Moratti said.

"We also spoke about Eto'o to understand if it's possible to do a deal with these two players.

"If an operation of this kind was carried out, it would regard both players," he added.

Cameroon international Eto'o scored 34 goals for Barcelona last season in their treble triumph, but his contract runs out at the end of next season, meaning he could leave on a free transfer.

Ibrahimovic has been an integral part of Inter's three straight Serie A titles and led the Italian scoring charts with 25 league goals last season.