LOS ANGELES, California (CNN) -- Midfielder David Beckham has told CNN "you can't be liked by everybody" after being involved in a confrontation with unhappy supporters in his first home fixture for the Los Angeles Galaxy since returning from his spell on loan with AC Milan. 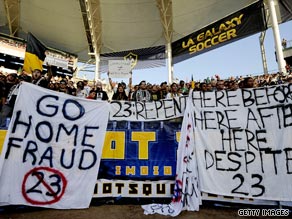 The former England captain attempted to jump over a barrier as he left the field at half-time into a section of the crowd that had been jeering him.

Beckham was held back by security staff, members of whom were also needed to restrain an angry fan who left his seat and rushed towards the midfielder.

The 34-year-old later told CNN that he was unaffected by the incident. Has the Beckham experiment in the U.S failed?

"At the end of the day you can't be liked by everybody," said Beckham. "There was going to be a certain amount of that, everybody knew about it and a lot of people predicted it -- and they weren't let down.

"These things happen, but the majority of the fans were incredible tonight not just to me but the team as well."

Beckham received a less than friendly welcome at his first home game after returning from five months with AC Milan -- the team the Galaxy faced on Sunday.

Beckham tells CNN he is committed to MLS. »

A hardcore section of the crowd booed Beckham every time he touched the ball and held aloft signs reading "Go Home Fraud" and "23: Repent" in reference to his shirt number.

Another read: "Hey Becks, Here Before You, Here after You, Here Despite You" while one stated: "Is evil something u are - or something u do?"

Earlier this year, Beckham indicated he wanted to stay in Milan rather than return to America, stating that the standard of play was far higher in Italy.

The apparent snub has angered some Galaxy fans, notably a hardcore that sit in the so-called LA Riot Squad section. Throughout the first half of the game he was subjected to jeers and obscene chants.

After the referee blew for half-time, Beckham tried to hurdle an advertising boarding and appeared to make a "come on" gesture towards fans. In response, one man left his seat, jumped down on to the pitch and attempted to run towards Beckham.

At this point security intervened and escorted Beckham to the changing room, while removing the fan from the pitch.

Despite the incident, Beckham returned in the second half. He was the last man to take to the pitch and hugged several of his former Milan teammates before gesturing towards the rowdy section of the crowd. A line of yellow-jacketed security staff stood below the supporters in the trouble area as a precaution.

On the pitch, Beckham had a hand in both Galaxy goals, scored by Alan Gordon and Bryan Jordan, as they twice came from behind to draw 2-2 with the Rossoneri. Thiago Silva and Filippo Inzaghi scored for Milan.

After the second Galaxy goal, Beckham turned and shrugged his shoulders in the direction of the section that had been jeering him.

The former Manchester United star was substituted after 75 minutes and walked off to a mixture of cheers and boos. On the boos, Beckham said: "It's to be expected. Sometimes it goes beyond it. The majority of the fans have been great."