(CNN) -- Sri Lankan spin legend Muttiah Muralitharan has announced he plans to retire from Test cricket after the November 2010 series against West Indies. 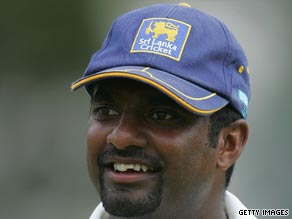 Muralitharan has earmarked the 2010 series against West Indies as the swan-song for his Test career.

The 37-year-old was forced to sit out the recent Test series victory over Pakistan with a knee injury and admits he finds it increasingly difficult to play five-day cricket, although he will continue in the shorter forms of the game.

"We don't have many Test matches next year but I'm thinking that next year's series against West Indies will be my last two Test matches," he told reporters after his man-of-the-match display in the 36-run win over Pakistan in the opening one-day international in Dambulla.

Muralitharan struck a crucial late 32 off only 15 balls and then claimed figures of two for 46 from his 10 overs.

He added: "I put in a lot of effort in the past month to get fit. The doctors told me I have to go through it and train harder because a knee operation will mean me being out for six or seven months.

"They think I will be able to play for one or two years and told me to have the operation when I finish playing. That means my career is almost over and I am not going to play for long."

Muralitharan made his Test debut against Australia in August 1992 and broke Shane Warne's world record of 708 Test wickets on his home ground at Kandy against England in December 2007.

He has since moved onto 770 Test wickets at an average of 22.18 runs per wicket.

Sri Lanka host the Windies for three Tests and five one-day internationals in November and December next year.