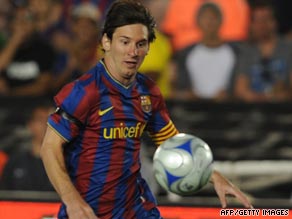 The 22-year-old forward is tipped to win the European and World Player of the Year awards after scoring 38 goals to help the Spanish club to an unprecedented hat-trick of titles last season.

"Barca will always do whatever is necessary to keep Messi happy at the club and we know that Messi has a complete commitment to Barca," president Joan Laporta told the team's official Web site.

"This commitment had to be repaid on all levels. The club will always equal that commitment and love that he has for Barca."

Spanish media have reported that Messi will be offered a deal worth $13.5 million per year which would make him the club's highest-paid player ahead of new signing Zlatan Ibrahimovic, and that his release clause will be doubled to $430 million.

Barcelona's announcement comes in the wake of a summer of big spending by rivals Real Madrid, who broke the world transfer record to bring in Cristiano Ronaldo from Manchester United and also signed AC Milan's Brazil playmaker Kaka and France star Karim Benzema.

Barca officials have already met with Messi's father to discuss the deal, the UK Press Association reported on Tuesday.

"There's a very good relationship between both parties," Laporta told www.fcbarcelona.com. "They know that Barca want the player to feel happy here.

"He's a great player, a homegrown lad. We're proud to have him in the team, because he is the best player in the world. Everything's going along well."

Messi moved to the Nou Camp in 2000, and made his senior bow in 2004-05, becoming the youngest to make his La Liga debut and youngest to score a league goal.

Barca won the Spanish title that season and repeated it again in 2005-06, also winning the Champions League.

Messi is currently on a preseason tour in the United States with Barcelona, who defeated David Beckham's L.A. Galaxy 2-1 on Saturday and were scheduled to play the Seattle Sounders on Wednesday.